Fishing from Kayak with the Deeper CHIRP+ 2 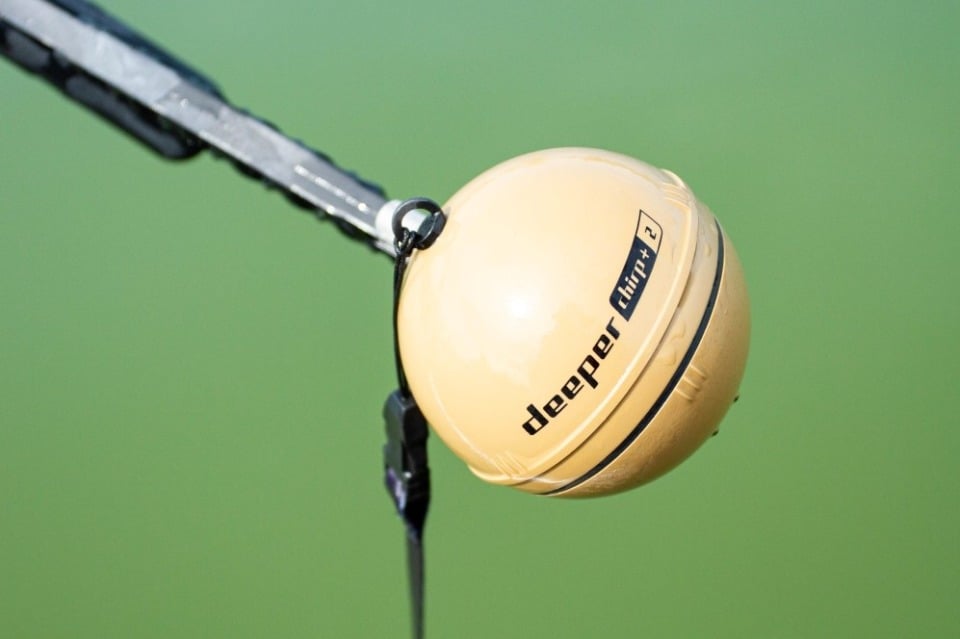 I was thinking about which sonar to buy for my kayak for quite some time. Because a friend of mine really recommended it very strongly, I decided to go for the Deeper Smart Sonar CHIRP+ 2. I want to explain to you why I chose this sonar and tell you how I feel about it after one season of testing it.

There are quite a few different systems on the market with quite similar but also with really different characteristics. The Deeper CHIRP+ 2 is one of the solutions that are a little different from the majority. I just had to see if the small, ball-shaped sonar could be enough to tell me what I need to know while fishing the Lake of Constance on my Grapper Catfish 10.

First Impression of the Deeper CHIRP+ 2

When I took the ball out of the package, I immediately liked the nice and sturdy bag that was included to keep the sonar safe during storage and transport. If you put the sonar in there, it is very well protected. There also was a bright orange cover for the top of the sonar in the package that is meant to help you see it when you are out night fishing. 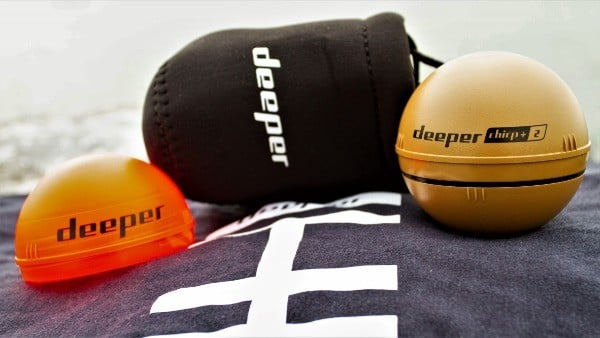 What I noticed pretty fast was that the tolerances are very tight. You will feel it yourself when you open the nice sandy coloured ball for the first time and especially when you try to close it again. If you think about it, it only seems logical that they have to be very exact during the production to make the sonar absolutely waterproof.

There also is a sticker that gives you directions on where to fix your strap or line when using the sonar. The three possible points are marked with “For Sonar Strap”, “Cast from Bridge” and “Cast from Shore”. This makes it really easy for first-time users. You will want to use the strap when fishing from a boat, kayak, or float tube. If you are fishing from shore, you will need a different angle to tie your line. When you are elevated above the water level you can use the fixation point labelled “Bridge” and while standing on a quite flat shore you will want to use the “Shore” option.

In any case, it is safe to say that the Deeper CHIRP+ 2 is very well built. This is very good and very necessary as you will put this electronic device into the water for hours at a time. When closing the sonar please make sure the arrows of the waterproof indicator are perfectly aligned to be absolutely sure that everything will stay dry inside. If you do this, there is nothing that could go wrong there. Double rubber seals at the critical areas make sure of that! 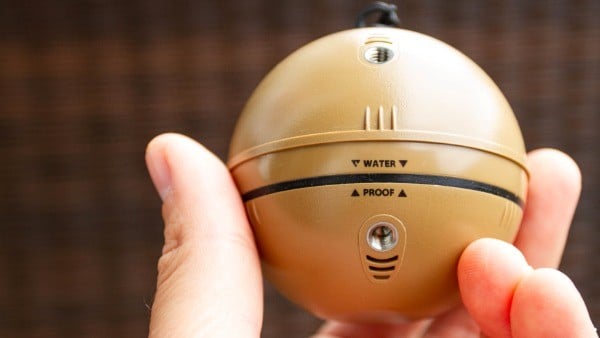 The Deeper CHIRP+ 2 on the Water

The Deeper CHIRP+ 2 is extremely easy to handle. You don’t need any cables, and you also don’t need to drill holes into anything to use the sonar. To mount the sonar, I simply use the Flexible Arm Mount 2.0, which easily installs on the kayak in a few seconds. 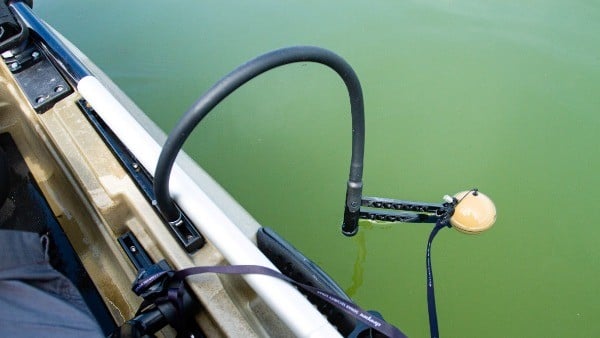 The Flexible Arm Mount 2.0 stays on my kayak after each trip, and I only take the sonar home to recharge it. I do the same with the tablet I use as a screen for my sonar. My wife gave me a used Huawei tablet that is perfect for using it on the water, as it was not expensive. To mount the tablet, I use a Railblaza Tablet Mount to which the tablet can be secured with one single hand movement. With very little effort and no carrying of heavy batteries or such things, I have got a very nice sonar system on my kayak that tells me everything I need to know about what is going on under the surface of the water. 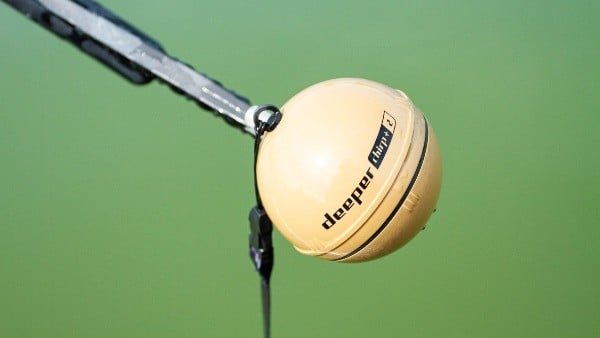 To connect the sonar to the tablet or smartphone, you need the Fish Deeper app. You have to search the Deeper CHIRP+ 2 in the WLAN settings of your tablet or your smartphone, and then you simply connect it. I never experienced problems with the connection. It worked perfectly every time. There was one instance where the app on my tablet froze, but this was only the case because I use a really old tablet that was pretty much resurrected from the dead. I chose this tablet because I wanted to check out how high the risk of damage is with all the wind, waves and water splashing around. My findings are that I am no longer afraid to use a tablet as a sonar screen on the water as it survived this whole season without a problem.

How the Data is Presented

With the Deeper CHIRP+ 2, you get a lot of information about the things that happen under the surface. I personally use it to search for structures or bait balls. The sonar also shows the temperature of the water as well as your speed.

You can change the sensitivity of the sonar beam by changing the width of the scanning angle. Meaning how broad the angle is in which the sonar scans are. You can choose the angle of the sonar cone automatically or manually. The possible options are a 47°, a 20° and a 7° angle of the cone. With the broadest angle, you can scan the largest area and with the smallest angle, you can get the most detailed information.

If you do not want to interpret the readings of the sonar yourself, you can even let it show you fish symbols on the display. In this case, tiny fish are shown where the programming of the sonar thinks the fish are. Even small fish with only a tiny distance between each other are shown as individual fish because the signal is very sensitive. You can also let the display show you how far away the fish is from the bottom or from the surface.

I chose to keep it simple and try to interpret the data of the sonar myself without the help of fish symbols. In my opinion, this helps you to learn more and be able to use the sonar at its full potential in the long run. The basics of how to read the data of your Deeper Sonar can be found here. 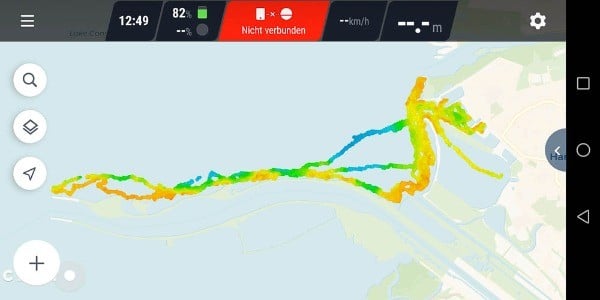 You can also create a depth map with your Deeper CHIRP+ 2 that shows you exactly what the structure of your body of water looks like. After a trip, you can study the depth map and decide where you want to go back to and where the structure is not really interesting. This is nice as you no longer have to remember everything for days or maybe even weeks.

I can use my Deeper CHIRP+ 2 for up to nine hours with GPS data or fifteen hours without GPS. The battery of the tablet is dead long before the battery of the sonar is empty. I was never able to empty the charge of the Deeper CHIRP+ 2 in one fishing trip. To help me with the problem of the tablet dying I carry a power bank on the kayak to recharge the tablet really quickly so I can continue using the sonar the whole day. After about one week's worth of fishing, I have to recharge the power bank.

What I Think about the Deeper CHIRP+ 2

You will have a lot of fun with the Deeper CHIRP+ 2. It is easy to use and delivers data without any unnecessary hurdles. In comparison to other systems, it is also quite cheap. I am very happy with my choice and have experienced no disappointment at all. As soon as I buy a waterproof tablet my sonar setup will be perfect for me.

Previous Post On the Quest for Carp with the Deeper PRO+ 2
Next Post Deeper Has Turned 10: Discover Some of Our Most Interesting Stories