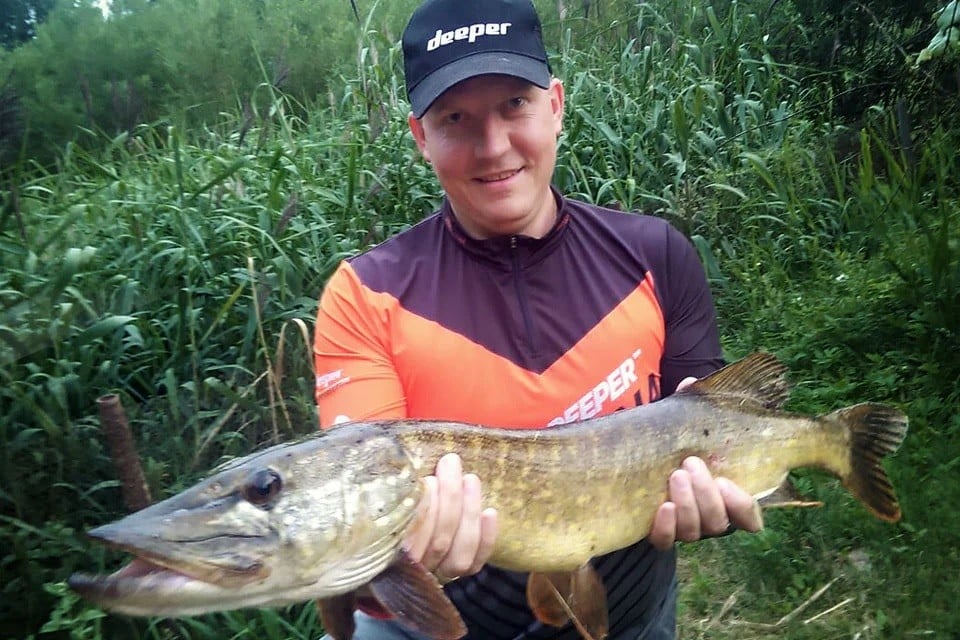 In his truck on the way back from his fishing trip, Arunas was feeling pretty good. He was warming up (outside it was barely above freezing), and he’d had a great session out on the lake. The highlight was landing a really nice pike.

But in fact his trip wasn’t over, and back in the warm comfort of his home he was about to make a discovery that would change the way he fished that water forever. All he needed was his computer, a smart tool for viewing his lake maps and scans, and some good old fisherman’s know-how.

“When I’m fishing these big lakes for pike in late fall, I have an approach I like to use. I mount my Deeper PRO to my boat and set it on Boat Mode in the app. I set up depth alarms for the range the pike will be in that time of year – on this trip I was looking at a range of about 1.5m / 5ft down to 6m / 20ft. Then I like to cruise over the water, trolling the Deeper and hunting for fishing hotspots. The alarms will sound when I enter that range, so then I can slow down and really look carefully at the depth readings to find the best fishing spots.”

With his Deeper depth finder set up, Arunas started trolling across the lake – a fairly new spot for him which he was still exploring. With his sonar in Boat Mode he was getting scans showing depth, vegetation, bait fish and fish arches.

But he was also creating an underwater contour map using his phone’s GPS as he trolled. And the map he created would prove crucial in helping him make an amazing discovery.

“At one point the depth alarm went off and I could see I’d hit a fairly steep drop off – going from 5m / 16ft up to 1.4m / 4.5ft. I was quite close to the shore so this looked like a decent spot. Honestly, I didn’t really pay attention to much else on the sonar readings because I wanted to get into the action.”

So, Arunas and his fishing buddy started making some casts. A few minutes later and he’d hooked up a really nice pike (73cm / 28” and 3.5kg / 8lbs). He tried a few other spots, caught another couple of small pike, then headed home feeling great.

A lucky hit or a new fishing hotspot?

“I like to use the mapping function even while I’m hunting for predators. It gives me a chance when I’m back home to look over the areas I fished in more detail to see if there are any important details I missed. Especially when you land a great catch, you want to figure exactly what happened – was it just a lucky hit, or did I find a spot that would be worth returning to?”

So, with a warm cup of coffee in hand, Arunas sat down at his home computer and logged in to Lakebook, Deeper’s web portal for viewing, analysing and sharing your maps on any computer.

And it was a new addition to Lakebook’s functions that helped Arunas understand exactly how he caught that pike at that spot. Thanks to a new update that syncs all your data, now you can view both your maps and your sonar scans on Lakebook, with every spot marked with precise GPS data.

“I started scrolling through my scans. Using the new functions on Lakebook I can see on my map the exact spot where I made a particular scan. So, if I see a fish marked on my scans, I just look on the map to see where the Deeper icon is, and this gives me the exact spot on the map, with GPS coordinates, of where I marked that fish.”

Arunas started scrolling through his scans to find the spot where he caught his beautiful pike. And he made 2 surprising discoveries.

“First of all, down at the bottom of the drop off I can see the pike I caught marked on the scans. By that point I had already started casting so I hadn’t seen it marking at the time.”

But his second discovery was much more important.

“Then I could see on the scans a huge ball of bait fish suspended over some lush vegetation as it got shallower. Turns out I had found the perfect spot for targeting pike in the autumn and winter. The bait fish will be using this vegetation all winter for feeding and shelter, and the drop off makes it a perfect ambush point for the pike. And on the scans you see it all perfectly, just like a picture.”

A fishing hotspot to return to again and again

Before he used Deeper and Lakebook, Arunas would return to the same spot where he had caught on a previous visit, but often he would be unsuccessful second time round. Sometimes you just happen to be in the right place, at the right time. But that doesn’t mean you’ve found a hotspot for your target species. And in the heat of the action, you don’t get the chance to analyse a spot in detail.

“Lakebook gives me the time to look through every spot in detail on a big screen in the comfort of my own home. Then, when I find a hotspot, I have all the information I need – depth data, GPS coordinates and a map so I can navigate back to that exact spot. I can even share it with my fishing buddies when we’re planning our trips.”

“Next time we will go straight back to that spot. It’s a good drop off at an ideal depth with lots of vegetation – the perfect spot for a pike. And when the ice is thick enough I’ll be targeting the same spot for ice fishing.”

Have you missed a fishing hotspot? Ever caught at a location one time but blanked the next, and couldn’t figure out why? Why not find out more about Lake mapping with Deeper, including a huge update to the Deeper App which makes data syncing easier and more secure than ever.

Then you can go from guessing, to knowing.