Catfishing at night on the Susquehanna River 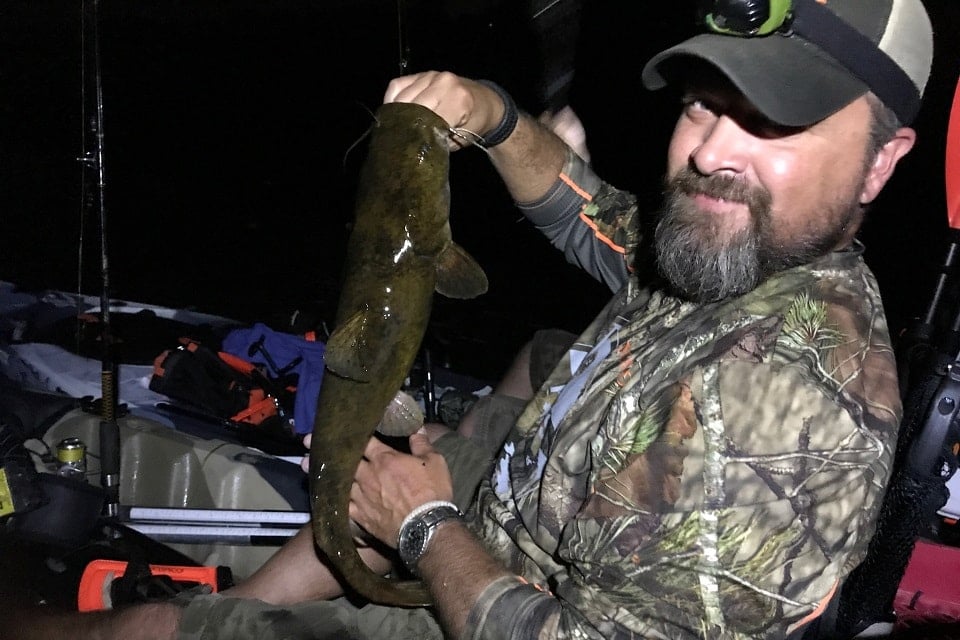 I was recently invited to join two good friends and proficient fishermen, Will Meiser and Uncle Catfish from the Rut & River Pursuits Podcast, for an evening of catfishing on the Susquehanna River just south of Harrisburg, Pa. I’ve heard many stories from the guys about chasing after these big predatory catfish from a kayak on the river in the dark, and I was very excited about the chance to tag along on this trip. They sent me a time and location to meet them and simply said ‘bring your kayak and a headlamp we have the rest of the gear’.

Knowing that I was going to be navigating unknown waters on a river in the dark, I brought some additional gear, including my new Deeper Pro+ unit.  Having the Deeper attached to the flexible arm and mounted on the kayak, it’s become a piece of gear I always had with me.  However, on this trip, I was excited to switch out to the Night Fishing Cover as this would be my first time using the Deeper after dark.

As I drove to meet Will and Catfish along the banks of the Susquehanna, my mind started wondering thinking back on recent pictures I’ve received from the guys where they were holding 40+ pound flathead catfish. I wondered if I would be able to land a fish that size and how in the world it would fit on my 10-foot kayak with me. I was excited, and nervous as I approached the parking area.

With light fading fast, we loaded all the gear on our kayaks and set out into the growing darkness. Being familiar with the area, Uncle Catfish and Will used landmarks on the far bank of the river to get us into position, somewhere around 20 yards upstream from a rock ledge that dropped off to deep channel where the catfish were known to cruise back and forth and hunt for their prey.

Using live bluegill for bait, I watched the two of them setting up several rigs by the light of our headlamps.  When the first rod was ready to fish, it was handed to me with the simple instruction of ‘throw it out there’ followed by a quick hand gesture.  I casted the bait somewhere downstream, hearing it land in the water, but having no idea where.  It was at that moment I came up with a plan that may forever change the way my experienced guides fished the river at night.

I took my Deeper Pro+ off the flexible arm mount, attached it to the rod I brought with me, and turned on the night fishing mode through the app on my phone.  I then tossed the unit out front of my kayak and allowed the current to take it downstream.  I watched my display as the Deeper flowed slowly away from us.  In what I perceived to be about 20 yards, I could clearly see structure change…there was the ledge and the depth just dropped nearly 6 feet very quickly.  I was marking bait fish just after the drop-off, a school suspended about a foot off the river bottom.  I quickly stopped the Deeper units slow decent downstream, and there it was…my glowing orange target.  Now that I knew where the ledge was and had a visual reference to aim for, I was able to cast much more accurately.  In fact, one cast, I hit the Pro+ unit with the bluegill.

With the more accurate casting we were able to land several flathead and channel catfish that night.  We didn’t manage to put anything in my lap in the 40-pound range, but after fighting several large cats around 20 pounds, I’m not sure my arms would have held up to the fight against one of those monsters.

With my first night-fishing from a kayak experience under my belt and my new Deeper Pro+ ‘Night Fishing Target Mode’ trick up my sleeve, it won’t be long until I’m back out there chasing cats on the river again!