At the River with the New Deeper PRO+ 2 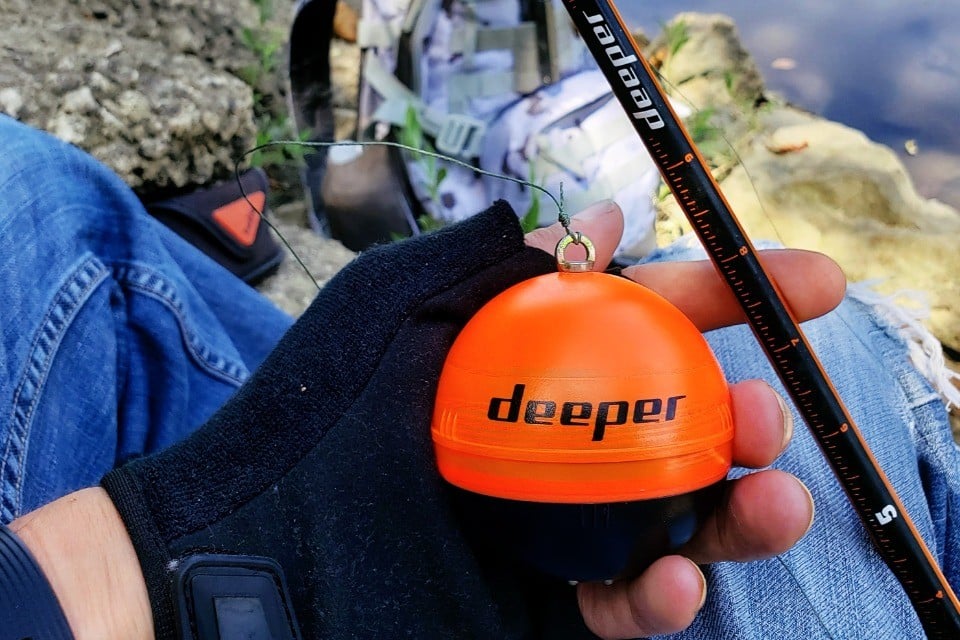 The Deeper PRO+ 2 is quite an improvement from the older model Deeper PRO+. I’d like to share why I am such a fan of Deeper Sonar, and this smart fishing gadget in particular, as well as share my first experiences at the river trying it out.

I think it is important to mention that all Deeper Sonar units use an internal Wi-Fi System that communicates the sonar data to a smart device, not Bluetooth technology. With a Wi-Fi network established, users have a far greater connectivity range than the competitor's Bluetooth reach. Both the PRO+ and PRO+ 2 can transmit data up to 100m/330ft. This is a substantial upgrade to Bluetooth's very limited range and gives the angler much more freedom and flexibility when targeting the underwater terrain. Also, the built-in Wi-Fi allows using Deeper Sonar even in remote areas where cellphone service is not available. 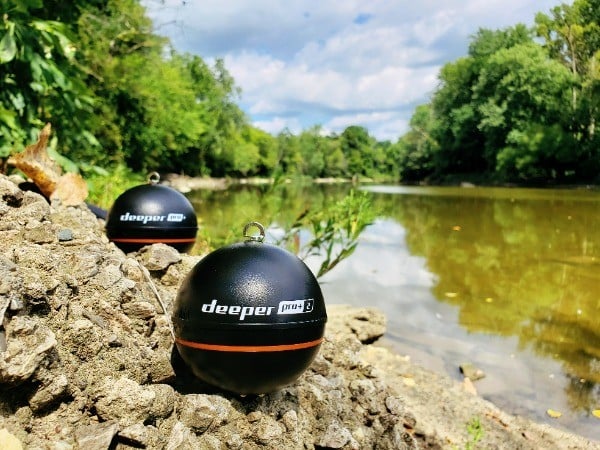 The most significant advancement is the new triple beam scanning angles. Users now have the option of choosing three different cone angles ranging from wide, medium, and narrow. The wide beam helps with scanning more area quickly, the medium cone will provide more detailed information once a hot spot is found and the narrow angle lets the user really zero in on a specific area, whether that is an elevation change, fish, weed line, or any other important underwater element. The breakdown of the cone angles includes 7° at 675 kHz, 20° at 240 kHz and 47° at 100 kHz. More on how I used these beams later.

Both the working time and charging times have been improved. The unit is lighter which benefits both casting distance and accuracy. The temperature range is consistent with the previous model with the ability to function between -20°C to 40°C or, -4°F to 104°F water temperature. The PRO+ 2 is compatible with the Deeper night fishing covers that provide easy visibility in low light conditions.

One of the benefits of using the Deeper PRO+ 2 is that it syncs with the amazing new software interface of the Fish Deeper app. Connecting to the Fish Deeper app is quick and easy and it has a plethora of customization features that the angler can personalize. While I could easily describe each one in detail, I will briefly mention them and let you explore the tools yourself. The Fish Deeper app is available free on every application marketplace and does not require the purchase of a Deeper Sonar unit to download and experiment with.

Four different fishing modes are offered: trolling, casting, ice fishing and a default Deeper Sonar scan system, so it will cover every fishing technique. The sonar display can be toggled between Raw or Basic, Raw providing a more detailed scan while Basic enhances only imperative details like water depth and fish markings. A vertical flasher option is available, along with the three different beam angles that can be easily switched in seconds. A fish size indicator allows the user the focus on only the size of fish targeted: Large, Large/Medium, or Large/Medium/Small. In conjunction with the fish size indicators, a fish depth preference is included, along with a fish icon audio alarm. But it’s important to note that fish icons should be taken with a grain of salt as the algorithm that assigns them can make mistakes, which is the case with any sonar brand. For the best results, it’s recommended to learn to interpret the raw readings of the sonar yourself.

Three color palette choices visually enhance the information even further. My favorite feature is the ability to adjust the sensitivity of the scan. I like to keep the percentage around 75 but having the option to increase or decrease the sonar instantly is vital when exploring a new location. Having a built-in GPS is a huge selling point for me. With this, users can create maps of all scans and access them later while marking points of interest along the way. Weather, temperature, offline maps and Fish Deeper Premium, which gives access to over 50 000 lake depth maps worldwide, are also available.

My original plan was to use the PRO+ 2 to scout new fishing locations in a river where I frequently target large flathead catfish and carp. I charged the device the night before with the provided cable and safely stored it in the protective pouch in my tackle bag. The protective carrying pouch is also included with the purchase of the sonar. During catfish tournaments, popular fishing spots fill up quickly, so my intention was to locate new fishing areas which I can use in the future if my favorite spots are unavailable. I was also curious if I could find different locations that hold carp. I previously landed a prestige mirror carp in this river, so getting new information about holding patterns will be very beneficial for future trips. Also, I am a bit of an explorer, so having a lightweight, easily portable, sonar system that I can attach to my book bag, or carry in my pocket, allows me to be mobile while walking up and down a river system. 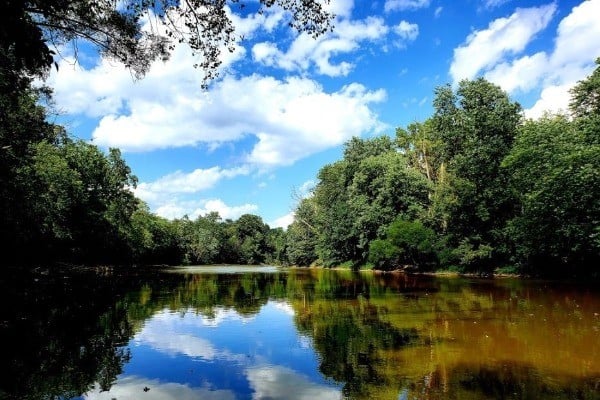 When reaching the new area of the river, I constructed a small camp to unpack my gear and set up equipment. This area of the river had little depth, so there was no need to use the PRO+ 2 at this location, but the shallow water allowed me to travel through the current quickly. After a 20-minute hike upstream, I found a bend that appeared to hold deeper water pools. An ideal first destination for the Deeper PRO+ 2.

After quickly attaching the unit to my fishing rod, and pairing it with my extra Samsung phone, I released the sonar in the current. After several scans, I painted a virtual image of the riverbed. To my surprise, this area was very flat, structureless and did not hold fish. Without the technology of the Deeper Sonar, I would have wasted valuable time and perhaps tackle, fishing an area that was void of fish.

Continuing, I noticed a bridge that looked interesting and decided that this would be my next stop. I always fish bridges when they are available for a few reasons. The pillars that support the bridge provide fish a break from the water current which allows them to rest and regain energy. The supports can also be used as an ambush location for larger, predatory fish, like bass and catfish. Beams are indication markers as well, which give the native fish something to use as a point of reference. Bridges also provide shade which is sometimes very scarce during the summer months.

With the Deeper PRO+ 2 in place, I did a few more scans and I found something rather interesting. I always use the wide cone angle scanning method first, especially in new areas, this helps me identify more of an underwater area faster. The Fish Deeper app did not show me the large catfish and carp that I set out for. It did, however, indicate a school of midsize fish suspending right below the surface.

With the narrow cone now activated, I performed a few more scans to zero in on the school of fish. After gathering my thoughts, I assumed that I found some bass. Being the multi-species angler that I am, I did bring along a small tackle tray of bass lures and tied on a top-water popper. It did not take long to receive the most exciting bite in all of fishing, a bass top-water blowup!

Deeper Sonar helped me locate an area of water that did not hold any fish, which saved me hours of fishing empty water that would have produced zero results. Furthermore, without the assistance of the sonar, I would not have known that several smallmouth bass had gathered and were suspended just 12 inches below the top of the water, enjoying the shade of the bridge. 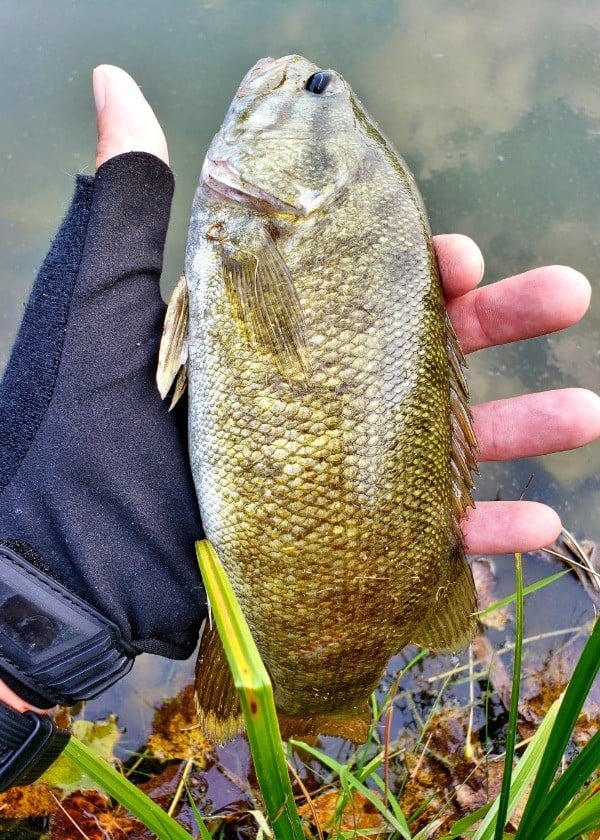 I have been a huge advocate of Deeper Sonar for years. Having this technology available for shore anglers is revolutionary, and essential for both hardcore anglers and weekend warriors. Using the Deeper to pinpoint fish is just one of many essential tools in its arsenal. Knowing the water depth, temperature, bottom hardness, structure, weed lines, elevation changes and drop-offs are all key elements to know when targeting any species of fish. Just having that information will improve any angler’s success on the water. After trying out the Deeper PRO+ 2, I can say that is definitely an improvement from the PRO+. But I would recommend any Deeper Sonar to aid in future fishing trips.

Previous Post More Than Just Fishing: Scientific Research and Surveying with Deeper Sonar
Next Post Deeper Has Turned 10: Discover Some of Our Most Interesting Stories