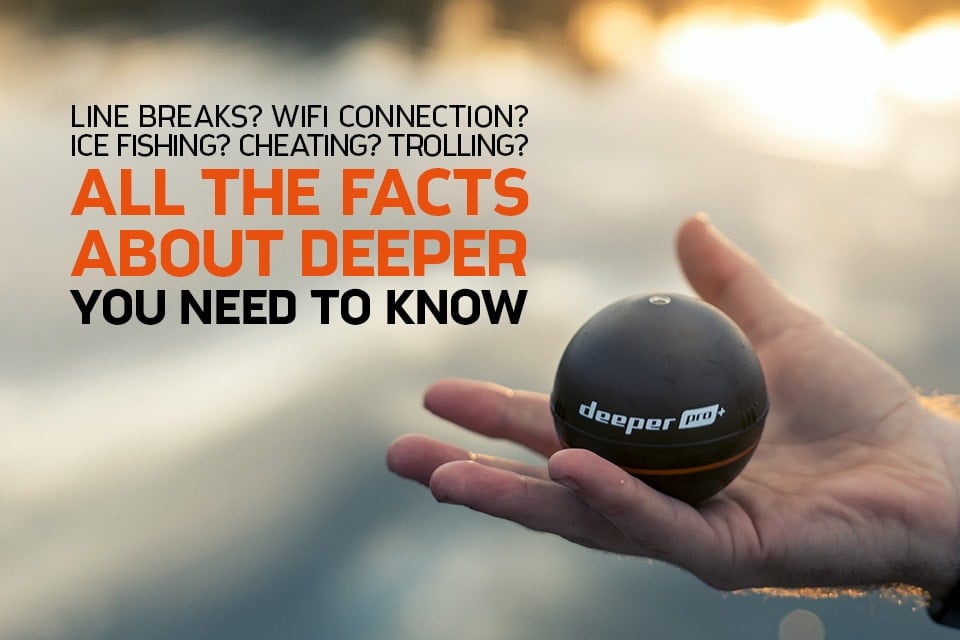 Not sure what to believe about wireless fish finders? Heard lots of stories about Deeper fish finders and want to know what the reality is? Take 5 minutes to read this short guide to some common misconceptions about Deeper and you’ll understand better if these are the right sonars for you.

When the first Deeper Fishfinder hit the shelves in 2013, it was something completely new for anglers to get their heads around. 4 years on, thousands and thousands of US anglers have already found tons of ways to use Deeper Sonars to help them catch more fish.

But, as with any new technology, there are still a few myths flying around …

We get it. You’ve invested in a high quality fish finder, so how do you feel about casting it into a lake?

But the reality is you can cast your Deeper safely without worrying about line breaks. You’re not going to lose your $200 fish finder. Here’s why …

We’ve tested Deeper Sonars on a wide range of lines, from mono to braid, 6lbs to 20lbs test. All of them are suitable for using with your Deeper Sonar.

Just make sure you cast correctly:

And that’s it. A few simple points to remember and you’ll never have to worry about line breaks.

After all, Deeper Sonars are specifically designed for casting. And finally, don’t forget YOUR DEEPER FLOATS, so the worst case scenario is that you get wet.

Of course, it’s natural to think big means better. You see a small unit and assume it’s less powerful or not a serious fish finding tool.

But think about the way technology develops. The more advanced it becomes, the smaller it gets. Just look at your smartphone, or your GoPro camera if you have one. They’re small, but they are definitely serious pieces of kit.

And Deeper Sonars are just the same.

The specs speak for themselves. The Deeper PRO series (PRO and PRO+) give:

Why not take a look at some traditional units and compare the specs to these. Or take a look at the Deeper PRO+ side by side with a Humminbird Helix 10. You’ll be surprised just how powerful these small, wireless units are.

Plus, Deeper sonars have something conventional sonars don’t: versatility.

If you’re looking for a light, flexible, ‘finesse’ set up for your kayak or for ice fishing, Deeper sonars offer a big level up on traditional units.

MYTH 3 – There’s no WiFi signal at the lake, so I can’t use my Deeper sonar there. 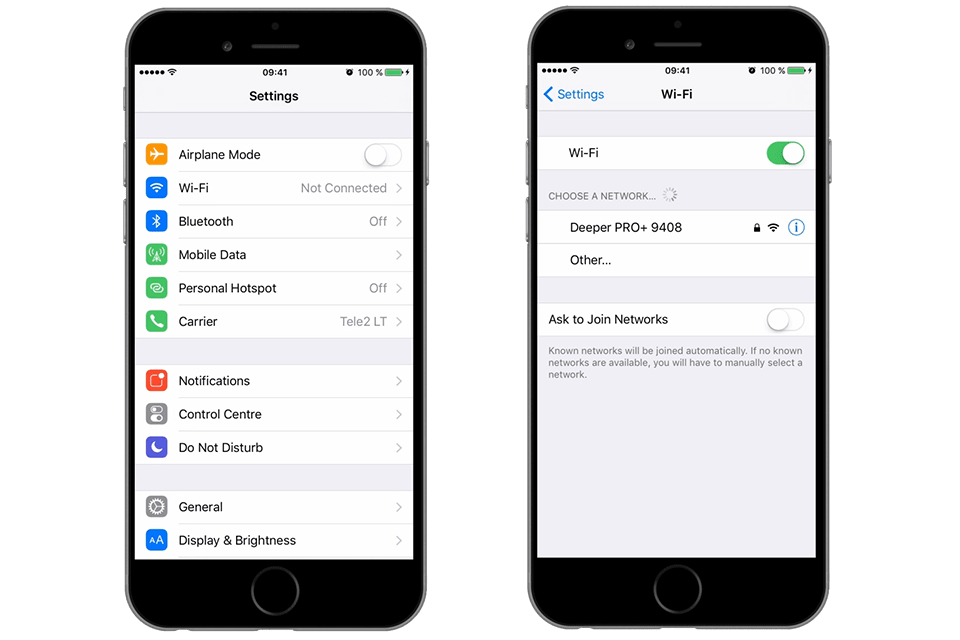 Oh no, it’s the tech stuff!! Actually, the basics are pretty straight forward, so if the latest tech usually leaves you scratching your head, don’t worry. The key thing to remember is you don’t need any internet or mobile signals to use your Deeper Sonar.

The confusion around WiFi is only about the name.

Most of us associate WiFi with internet, because the routers in our homes, at work or in our local coffee shop use a WiFi signal to connect our devices to the internet.

But actually, a WiFi signal doesn’t have to be for the internet, it’s just a strong wireless connection between two devices. In the case of your Deeper Sonar, the WiFi connection has nothing to do with internet connection. It’s just a wireless signal your Deeper uses to transmit the data to your phone. It’s like Bluetooth, just stronger, with a bigger range, and it can handle more data.

Another way to think of it is that your Deeper works like a hotspot. It creates a signal which your phone or tablet connects to.

So there’s no need for a cell or internet signal to use your Deeper Sonar. Even the GPS functions on the PRO+ work with no need for a phone signal – it connects directly with GPS satellites. 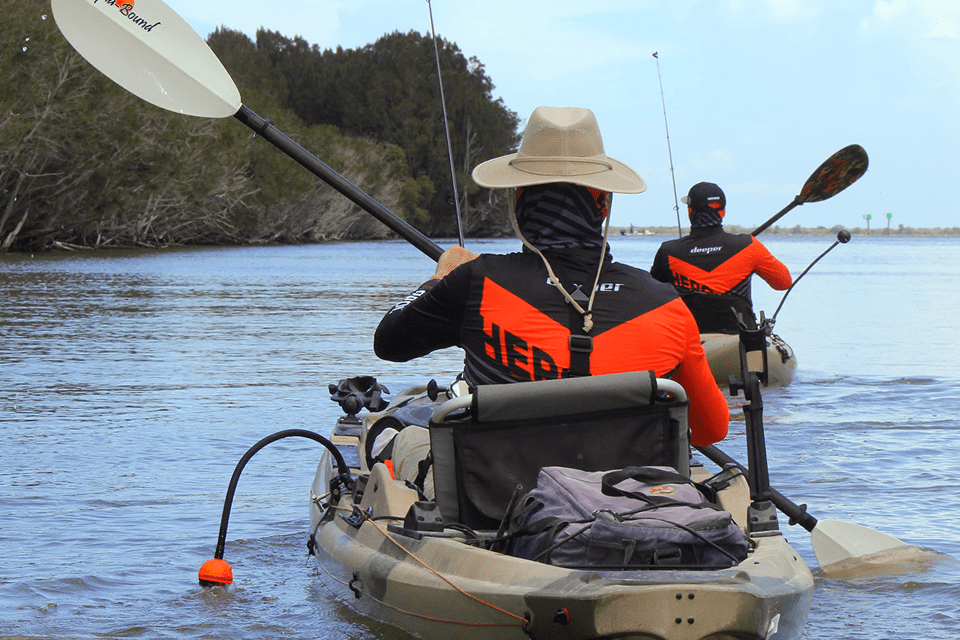 Because the Deeper Fishfinder was such a huge step forward for shore anglers, sometimes boat and kayak anglers think it’s not for them too.

But that’s not the case – you can troll your Deeper.

Deeper sonars have a dedicated mode for boat fishing. In this mode you can troll your Deeper to find fish, see structure and create underwater contour charts live.

And the PRO series models (the Deeper PRO and PRO+) have the right specs for smooth trolling.

With wireless sonars, 2 main factors affect whether trolling is smooth or not:

The PRO and PRO+ use a WiFi signal to connect to your smartphone: this gives a strong, reliable connection when trolling. Sonars that use Bluetooth connections don’t give a reliable enough connection.

As for the number of scans, the PRO and PRO+ send 15 pings per second. Here’s how this helps with smooth trolling.

Let’s imagine you’re moving at 4mph – that’s 6 ft per second. So at 15 scans per second, each scan is going to be sent about 5 inches apart. This means you should comfortably pick up drop offs and brushpiles, balls of bait fish and large fish. Slow down to 2mph and now each scan is only 2.5” apart, meaning you’ll pick up much smaller objects and get better accuracy.

MYTH 5 – Deeper only works for 1 style of fishing 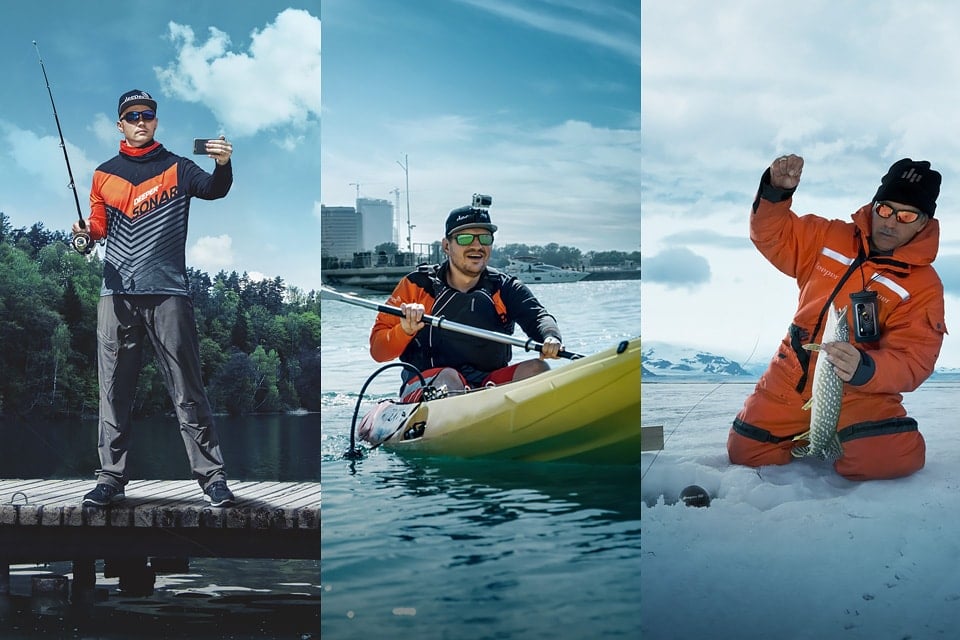 Before Deeper fish finders, the rule was 1 fishing type, 1 sonar.

Buy one sonar for your ‘yak, another one for your boat, then a flasher for ice fishing. So of course, lots of anglers assumed Deeper Sonars are the same – just a fish finder for shore anglers, or just for ice fishing.

But the old rules no longer apply. Your Deeper is ready for any type of fishing you want to use it for.
You can use your Deeper for shore fishing, ice fishing, kayak fishing and boat fishing, in fresh water and salt water. Each fishing mode is designed to give the same quality of performance you’d expect from a traditional sonar unit.

Let’s answer those questions to see why the idea that Deeper sonars are expensive is a myth.

So first up, what about your time? After all, in this day and age there are few things more valuable than your time. So ask yourself, what’s an hour of your time worth?

Now think about how much time you waste fishing areas where there are no fish, or fishing a jig 25ft deep when the bass are suspended at 10ft. Marking fish and locating structure is going to give you more time doing what you came out to do – catching fish.

So I get a bottom of the range wireless sonar and find fish, and that will save me time, right?

Wrong. A cheap piece of kit is going to end up costing you more time that it saves – losing connection, scans that read 10ft the first time then 14ft the next, fish icons that make bait fish look like monsters.

To really get the most from your time on the lake, you need a sonar unit you can trust.

Take a traditional ice flasher like the Humminbird ICE 35. Now knock off $80 and you have the price of the Deeper PRO. But the Humminbird must have better specs, right?

In fact, the Deeper PRO outperforms in every area:

And the PRO has a zoom function and GPS Ice Hole Marking, the Humminbird doesn’t.

Here’s the head to head:

Here’s the head to head:
So, for $80 less you get a much more powerful ice flasher. It’s difficult to argue with that.

And then the ice melts …

You can pack away your ice flasher, then head down to the store and buy a new sonar unit for your kayak.

Or just mount the same Deeper PRO you used all winter onto your ‘yak and start trolling. And you’ve also got a unit you can cast out.

So imagine you invested in a seperate ice flasher and kayak fish finder compared to a Deeper PRO. You’re probably out of pocket about $300 – $500, and you’re probably using less powerful sonars. And you still don’t have scanning from the shore.

Chances are you won’t cause any disturbance at all casting your Deeper. You may even attract fish.

At 0.2lb, Deeper Sonars are light. They do land with a splash when you cast them, but their light weight minimises the disturbance. Many species of fish will actually find this splash interesting, and will come to check it out. Most will simply ignore it.

One option if the fish are particularly sensitive, is to cast beyond the area you’re interested in then, the reel back slowly. Or, if you’re fishing a river, you can use the current to drift your Deeper Sonar to the place you want to scan.

The simple answer is no.

The scientific explanation is that, while fish can hear, this is generally at a much lower frequency (0.1 – 1 kHz) than the frequencies sonars use. These range from 50 to 800 kHz – Deeper Sonars have 2 sonar beams, one 90kHz and one 290kHz. In shallow waters, other sounds like engines may disturb the fish, though this also depends on the species.

Anglers have been using sonar technology for over half a century. And in salt water and ice fishing, the debate over whether using sonars is cheating has been dead for years.

But because sonars are a new technology for shore anglers, you sometimes here talk that “using a Deeper is cheating” or “it takes the skill out of angling.”

In the end, this all comes down to personal choice. If one angler likes (and has the time for) an old school, trial and error approach, that’s cool. If another wants some smart electronics to save time and help them learn more, no problem. We each have our priorities and preferences.

What is definitely true is that your fish finder will only give you data, it’s you that makes sense of it and uses it to land a catch.

And smart technologies like Deeper fish finders are definitely helping to get more anglers out on the water. There are 2 groups in particular: 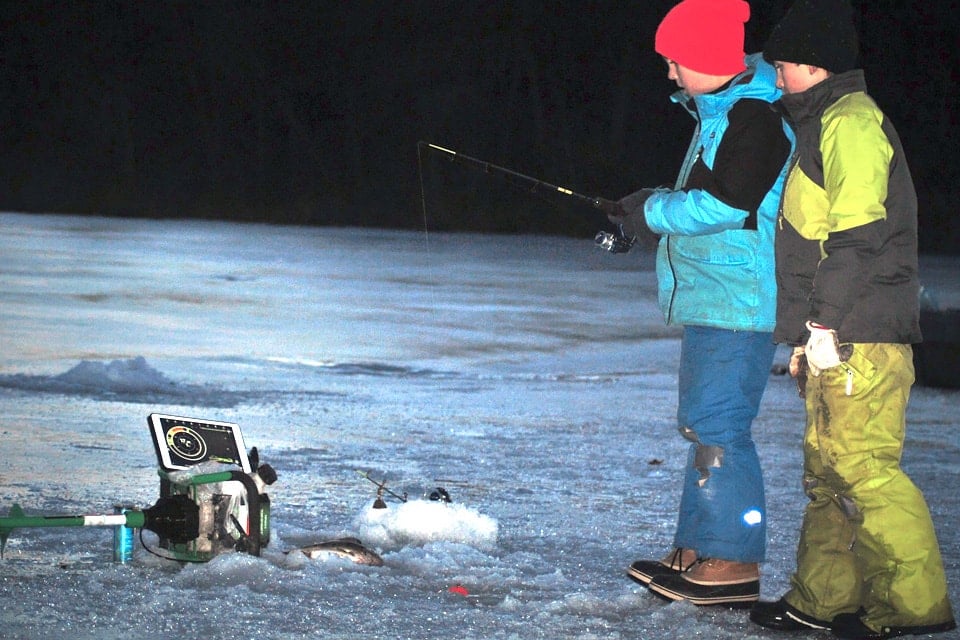 For those shore anglers who are new to fish finding technology, there can sometimes be some confusion about how Deeper sonars work. It’s also easy to confuse Deeper Sonars with cameras that actually film underwater.

Just remember these points when you’re thinking about what Deeper Sonars do:

Like any new technology, lots of myths exist. Hopefully you now understand better how Deeper Sonars work and what they can help you with. Then it’s time to get your Deeper out on the water and start making new legends in your fishing – new locations, new PBs, new know-how.